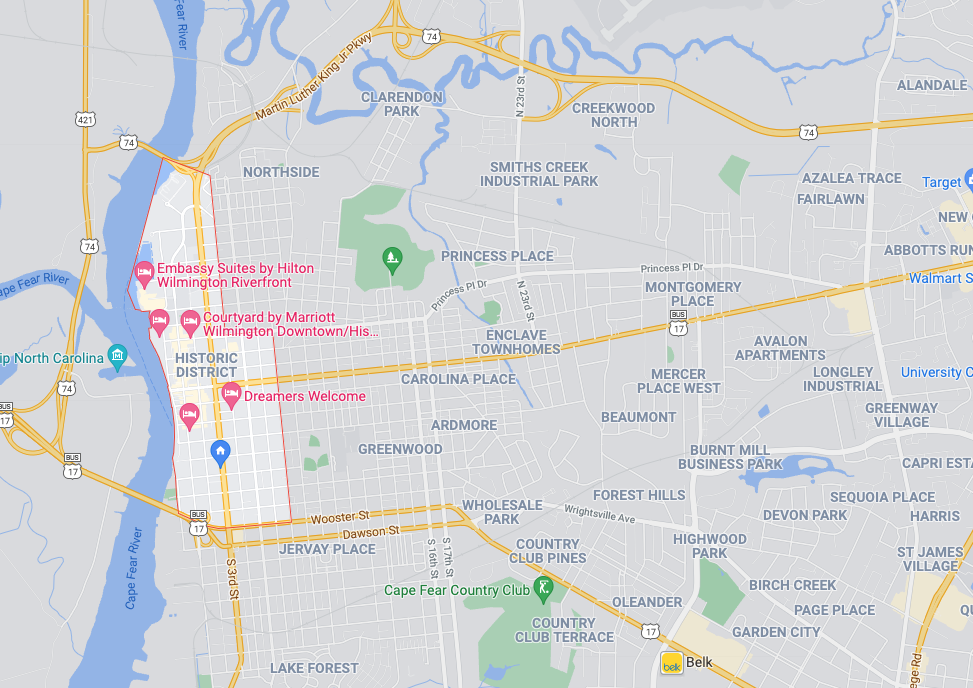 Historic Downtown Wilmington is an area designated by both local historic district boundaries and a National Register of Historic Places. It is considered to be the blocks between Castle Street on the south and the Isabel Holmes Bridge on the north, and 8th Street to the Cape Fear River.

Historic Downtown Wilmington flows into surrounding neighborhoods that have seen gentrification and significant property rehabilitation in the past decade, including the Castle Street Arts & Antiques District, Brooklyn Arts District, and Carolina Place. Other areas of Wilmington, like Midtown, Monkey Junction, Ogden, Landfall, and Forest Hills, are less than 20 minutes from downtown with the option of taking any number of routes that include Oleander Drive, Market Street, Wrightsville Avenue, Carolina Beach Road, and MLK Parkway.


Find Your Next Home in Downtown Wilmington North Carolina 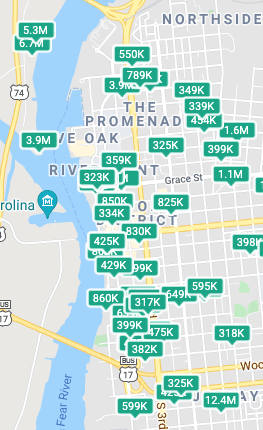 In September 2021, a search for homes for sale in the 28401 zip code for Historic Downtown Wilmington North Carolina resulted in 209 listings, including multi-million dollar properties for development, luxury condos starting at $2 million, lovingly renovated historic homes, bungalows and townhouses. 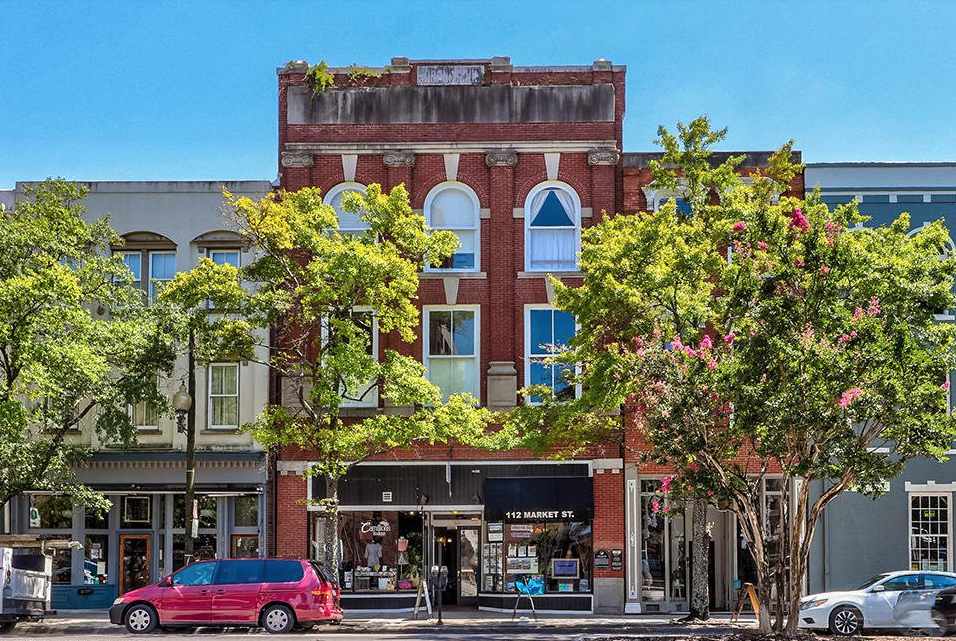 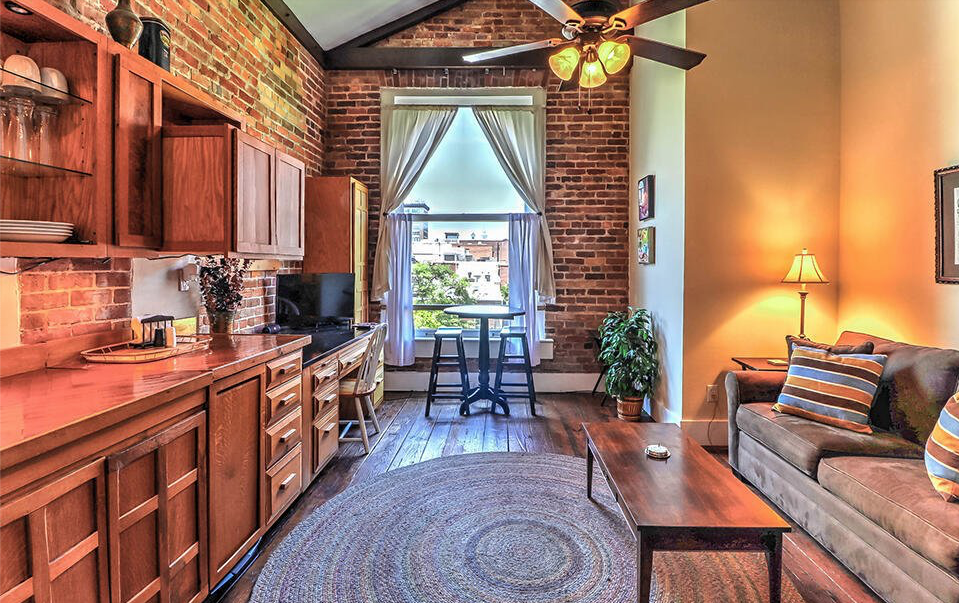 Downtown Wilmington also includes local historic districts, established by the Wilmington City Council following recommendation by the Historic Preservation Commission. Each local district has its own uses and zoning regulations. Any exterior change to a property - including fences, signs, light fixtures, etc - in a local historic district or Historic District Overlay must be cleared through the City of Wilmington's Historic Preservation Planner, via a Certificate of Appropriateness (COA) and a process of reviews and public hearings.

The Historic Wilmington Foundation is a nonprofit advocating for the education and preservation of built history in the Cape Fear area. The historic plaques on homes and other structures in the downtown area are obtained through application at the Foundation website.


Because Wilmington is less than 20 miles from the coast, the weather mirrors that on the beaches, with a bit of a delay, depending on the direction and speed of the wind. It's not uncommon for it to be raining in Carolina Beach, sunny in Wilmington, and then raining a half hour later. That is pretty typical coastal weather. In September, the average high is 84 degrees with a low of 66. June is generally the hottest month, with highs around 90 degrees, and January is the coldest month with lows around 36 degrees. Monthly rainfall is from 3.5 to 7.5 inches, and annual snowfall is less than one inch.

During periods of moon tide and heavy rain, water sometimes spreads into the low grounds along the river in downtown Wilmington. Most structures are built up a few feet from the sidewalk, and sandbags take care high water. Effects from hurricanes are not only high winds and rain, but impacts on the height of the Cape Fear River.


Downtown Wilmington is a foodie mecca, with long-standing favorites and an ever-growing influx of trendy new restaurants. Wilmington boasts world-class chefs, many of whom have been featured on popular food shows like Iron Chef and Diners, Dives, and Drive-ins. Local menus often capitalize on the ready availability of fresh-caught seafood and shellfish, or the current trend of farm-to-table.

For romantic dinners, locals love Caprice Bistro. Southern specialities are served up by The Basics in the Cotton Exchange, and by Dixie Grill. Trend-setting foods are the hallmark of Pinpoint, Manna, RumCow, Capricho, and SeaBird. Elijah's, The George, and The Pilot House offer good food along with plenty of outdoor seating, a view of the Cape Fear River and a front row to spectacular sunsets, and are heavily frequented by locals as well as tourists.

Because Wilmington is a college town - with UNC-Wilmington - and close to military bases, Fridays and Saturdays during the summer often see crowds on the downtown streets, with young people enjoying live music, local breweries, and bars with lots of outdoor seating.

Downtown Wilmington is a great destination for lovers of fine food and wine. Between old favorites and new offerings, the dining experience in Wilmington is always changing, and definitely offers something for everyone. The list of good
restaurants within just a couple square miles is so long that it's really hard to pick a "downtown favorite." The great thing about enjoying a meal downtown is the walkability. You can park, enjoy a cocktail at one spot, and then walk a couple blocks to dinner. Reservations are seldom needed, although during tourist season, it's not a bad idea to call ahead.


Wilmington has been a state of active improvement, development, and expansion into the surrounding neighborhoods for the past few decades. The downtown area, with its stunning historic homes and bustling shopping streets was a completely different scene before the mid-1990s. One of the first mansions to be purchased and an extensive restoration undertaken was The Verandas. An 1853 home that suffered extensive fires and water damage, Verandas was boarded up until it was bought by its current owner with the intension of transforming it into the luxury bed and breakfast inn that continues to operate today. Every block downtown has stories of transformation, and many of the downtown warehouses were converted into luxury condos, like the J.W. Brooks building.

The Cape Fear River Walk was conceived in the late 1980s, and now, almost four decades later, connects the riverfront from Nun Street through downtown to the new residential development and River Front amphitheater just south of the Isabel Holmes Bridge.

Downtown Wilmington has a friendly and active network of neighbors who share a love of historic homes and preserving the Southern charm of the city. Less than three miles from end-to-end, people who live downtown walk to restaurants and entertainment, or just to enjoy a sociable chat from neighbor's front porches. Many residents of Downtown Wilmington have lived in their homes for decades, and enjoy telling the story of their renovation and ongoing efforts to maintain and improve their properties. If you get out and have a friendly "hello" ready, within a month or two you will know almost everyone's names.

The Residents of Old Wilmington (ROW) is a non-profit membership organization that encourages social connections and advocates for the preservation of the downtown neighborhoods. The ROW Christmas party is a wonderful opportunity to meet downtown neighbors and make new friends, and their fundraising activities - like the Back Door Kitchen Tour - are a great way to get involved.

It's not out of the question to visit Wilmington for a week and not run out of things to do right downtown. Many people who live downtown have been known to not move their car unless running to the grocery store or heading to the beach for a day.

In addition to restaurants, bars, and shopping, downtown offers movies at historic Thalian Hall (check out the chandelier!), comedy clubs, music venues including the large new waterfront Live Oak Bank Pavilion at Port City Marina, and the Children's Museum, Cape Fear Museum, and Railroad Museum. The Wilson Center at Cape Fear Community College brings world-class shows to the area. The Hannah Block Historic USO/Community Arts Center provides theater buffs with plays and other events, many of which are geared specifically for children. 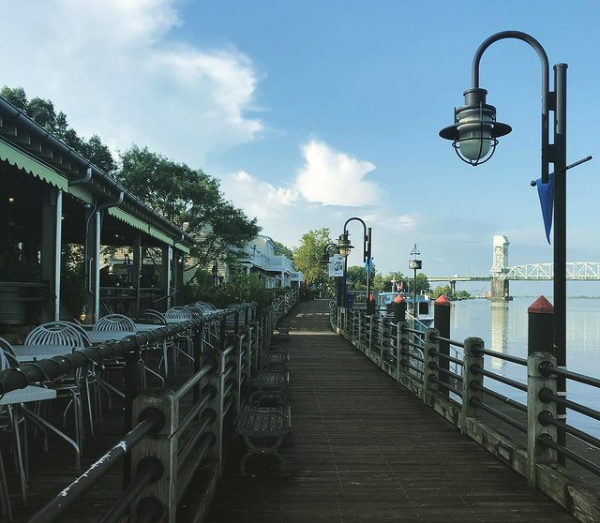 What else is there to do downtown? Sporting events like 5K races are held year round. The Battleship U.S.S. North Carolina is right across the river. From spring through fall, the Downtown Farmers Market draws morning crowds. Art shows and other events are plentiful, and Fourth Fridays are gallery walk nights that bring crowds of art lovers out to enjoy art, socializing, and wine sipping. Holidays usually feature downtown parades, and Santa shows up for the lighting of the giant Christmas tree every year.

Of course, no one who lives downtown - or within a couple states - will miss the annual Azalea Fest, which brings headline music acts, days of festivities and parties, and sidewalks lined with crafts and other street fair vendors.

In the time since we've made Wilmington home, we have seen a major revitalization in downtown Wilmington. TheRiverwalk is exceptional with shopping, dining and attractions that curve along the historical Cape Fear River. At nearly 2 miles long, it's easy to see why USA Today has ranked it as the 2nd best riverwalk in the country! Our family loves all that the downtown area has to offer for all ages. Whether you want to carol on a horse drawn carriage during the holidays, see the fireworks light the sky over the river or visit one of so many great museums and entertainment venues, it's a win

for our entire family and those who come to visit us. And now more than ever, the options for housing in downtown Wilmington are expanding with not only historical homes and quaint cottages getting a facelift, but new properties being added to the area.

Search the full MLS and Exclusive Property Listings.
(Prices and inventory current as of July 3, 2022)

See local market activity affecting the value of
your home & maximize your investment.